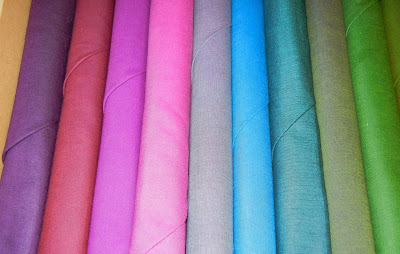 The second session I attended during Schoolhouse day at Quilt Market was on Peppered Cottons, put out by Studio E. 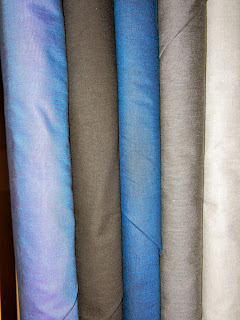 We recently received these in the shop, they are named after Pepper Cory, of course, and are actually "shot" cottons. 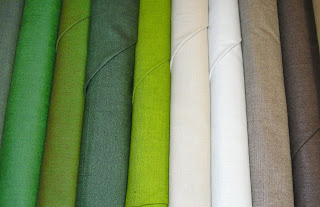 Shot cottons get there name because woven fabric is made up of loom or warp threads (threads that are threaded onto the loom) which run parallel to the selvedge and weft threads that run selvedge to selvedge. These weft threads are loaded onto a shuttle that "shoots" across the loom back and forth while the fabric is being made.
Shot cottons get their name because they are unique. While normal fabric is being made the threads for the warp and weft are the same color, in shot cottons these are two different colors which gives a very different overall color effect. Thus the "shot" of shot cotton is the extra color seen in the weave.
Pepper Cory gave the following suggestions for shot cottons:
If you pre-wash your fabric, do so gently and, in pieces large than  quarter yards if you are using a washing machine. Pieces smaller than one quarter yard should be hand washed. After machine washing you should clip frayed threads off before putting the fabric in the dryer. She also gives further information about shot cottons on her blog.
Washing will remove the very slight sheen that these fabrics have that is applied during the finishing process called "calendaring". Washing will plump the fibers of both thread colors as well which makes peppered cottons great for rag quilts or chenille effects.
Shot cottons are not recommended for quilt backings but are sturdy and beautiful for quilt tops, bags, purses and even some gently washed clothing.  Shot cottons shrink very little when washed- comparable to any other quilting fabric shrinkage.
They have been enormously popular with "modern" quilters and traditional quilters as well. 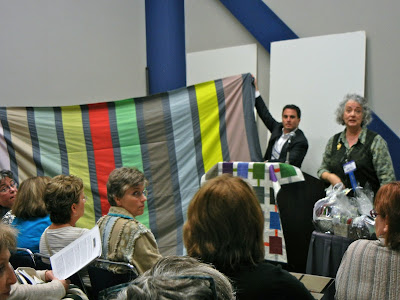 Studio E was looking for some softer colors to compliment and fill out their current jewel tone colors. The photo above shows the new colors being released in December to quilt shops. I am not sure the chartreuse green on the right end is "soft" but I like it!
Speaking of shot cottons and Studio E.... They are having a contest! Check out the Studio E website for more information. We are talking CASH prizes ($500 for the top winner) and even prizes for the shop selling the award winner's fabrics! Win-Win! Check it out and see if you might be interested in playing with a little Peppered Cotton?
Posted by Deb and Mandy at 7:17 PM